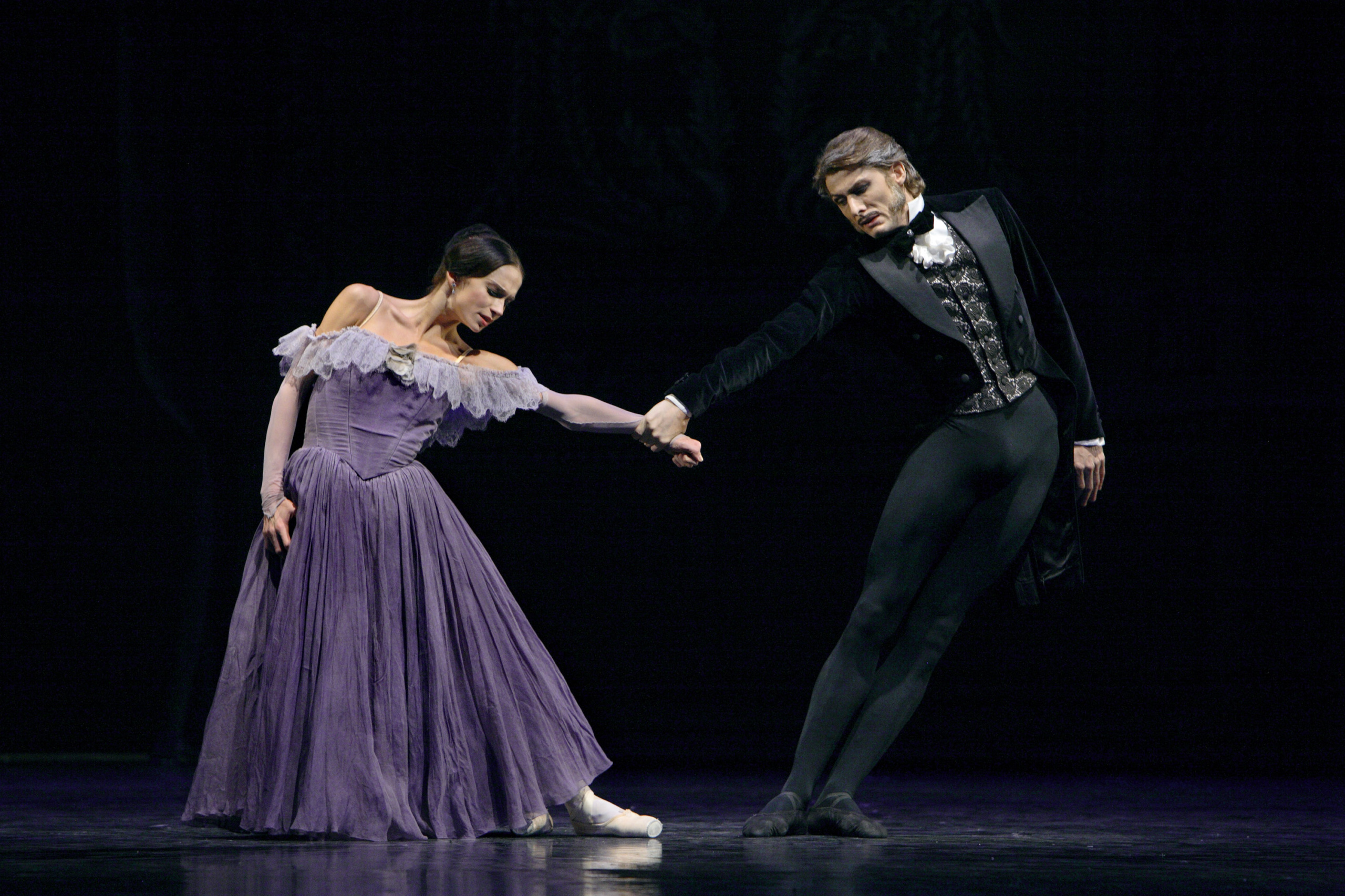 Onegin is a masterpiece of modern German ballet, premiered by the Stuttgart Ballet in 1965 with John Cranko as choreographer.

The plot is based on the vers novel of the same name by the 19th century Russian poet Pushkin, and the music is taken from several small works by the great Russian composer Tchaikovsky, rather than from his opera music of the same name.

In a wealthy Russian country house, the family is preparing a birthday party for their eldest daughter, Tatiana, and the youngest daughter, Olga’s fiancé, Lensky, has brought along Onegin, a charming young gentleman. The innocent Tatiana falls in love with Onegin at first sight, but the cynical Onegin not only rudely tears up Tatiana’s love letter in front of her, but also deliberately flirts with Olga, causing Tatiana great physical and mental harm. In desperation, she married the loyal and honest Duke Gremin, but was blessed with a happy family life in St. Petersburg. Ten years pass quickly and Onegin, after all the vicissitudes and hardships, meets Tatiana at Duke Gremin’s family ball. He is overcome with remorse, realising that the love he lost was priceless, and frantically pursues Tatiana, who has become a noble lady. But Tatiana quickly awakens from the struggle between love and emotion, resolutely tears up Onegin’s love letter in return, and then makes him leave. For the first time in his life, Onegin feels true love burning, and for the first time he falls at the feet of a woman begging for love, but to no avail, because it comes too late.

The success of the ballet ‘’Onegin’’ lies in the perfect integration of classical ballet techniques and modern dance concepts, fully embodying the choreographic principle of “making dance for love”, thus making a major breakthrough in the programmed language of classical ballet, especially the three touching Pas des Deux between Onegin and Tatiana, which are great combinations of love and dance. Unlike the classical ballet, where the splendid sections always show off only the perfect innate conditions of the dancers and the difficult moving techniques, but lack the abundant emotional power and strong dramatic tension.

The main characters of this performance at the Staatsballett Berlin were Polina Semionova (as Tatiana) and Alejandro Virelles (as Onegin), this was also the first time Virelles played this role in Berlin. I don’t know how much the epidemic has affected the company, but at least from this show, It feels that everyone is a bit negligent in their rehearsals. In the first act, where all the dancers jeté across the stage, the orchestra is playing faster and faster, and the dancers are dancing equivalently, at the end, it’s more like a race than a ballet. The Pas des Deux between Tatiana’s sister (Alizée Sicre) and her fiancé (Suren Grigiorian) also felt a bit lacking in flow.

The Berlin production was sadly not as impressive as the Stuttgart Ballett or the Royal Ballett in London that I had seen before. In the Pas des deux between Tatiana and Onegin, there was no chemistry between the two in the dream dance, and Virelles’ performance as a first soloist is a bit disappointing. Fortunately, in the third Pas des Deux of Tatiana and Onegin, the adult Tatiana danced by Polina was with a very charming character, and the tension between them was tightened more and more, the emotion was so abundant that it overflowed the whole stage.

I’ve seen more than a dozen Ballet of Polina, although I think she is near perfect, when she is dancing the role of a young girl is still lacking some youthfulness, from her Black Swan role until now, I think no dancers can do the “strong woman” role better than her. In Berlin’s production, the role of Onegin may be more appropriate for Dinu Tamazlacaru.

It has been three years since I last saw Cranko’s version of Onegin, when I was reading the criticism of inferiority of female roles in the ballet, I was against it and thinking that ballet works should be judged in the context of the creative discourse of the time. But a few years later, when I saw Lensky’s duel because of his partner’s flirtation with Onegin, I started to understand the disgust of the idea of objectifying his female partner as his own property.