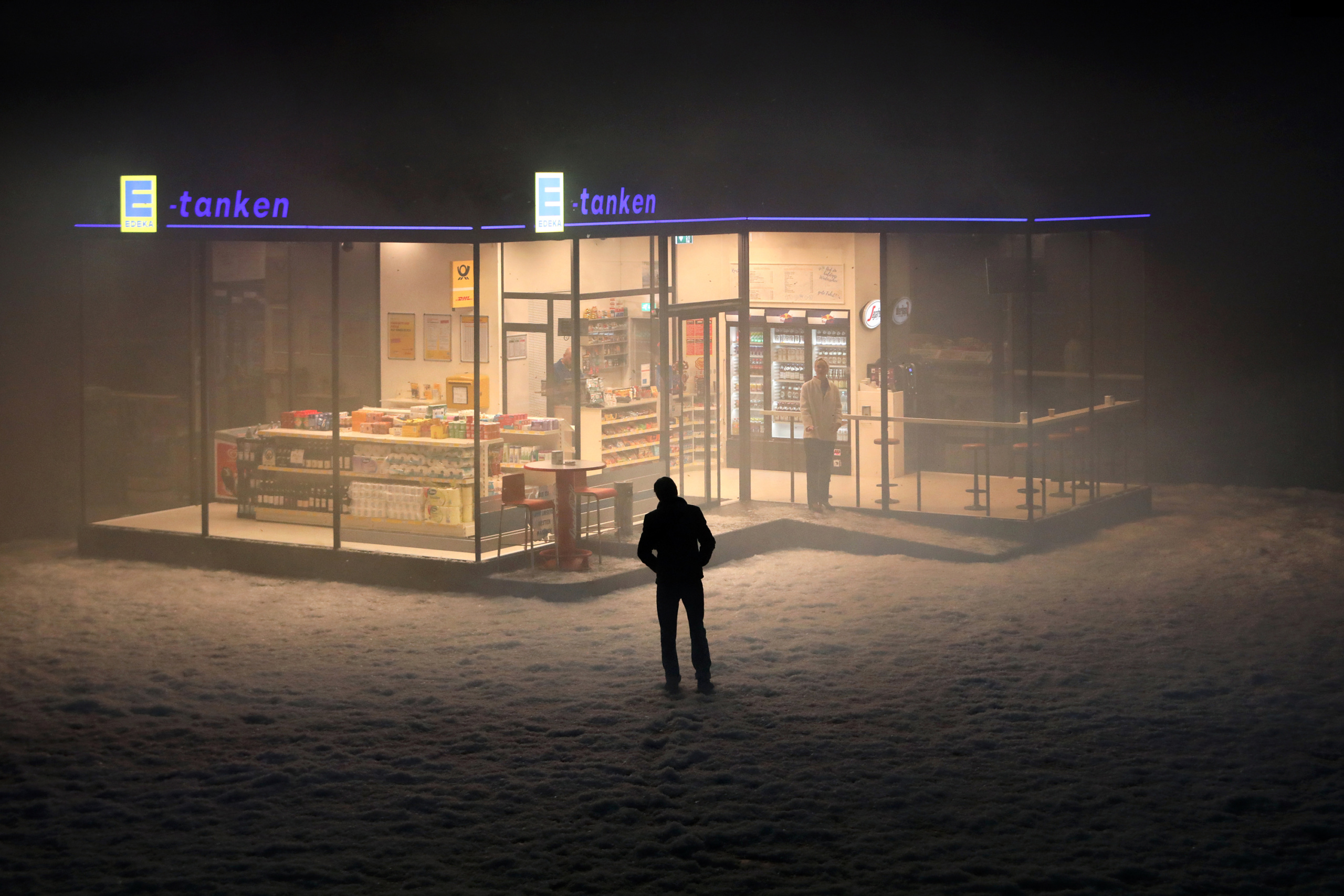 A brightly lit gas station occupies the entire stage, and every detail of the gas station is a one-to-one replica of the one in real life, from chewing gum and potato chips to several different Marlboro cigarettes. In the huge glass walls is the manager of the gas station giving training to the new employee, and the everyday conversations of three people develop into a huge interlocking web of relationships over the next six hours.

A successful businesswoman and her indisputable husband, an African-American girl who dreams of opening her own barbershop, a resentful DHL dispatcher, a corrupt police officer, a sex worker who wants to feel in control. There are 16 characters in this marathon performance, each with very different lives, but all slowly converging at a late-night gas station on the outskirts of town. None of these characters is the protagonist, but the all their life stories are well organized in the endless conversations about almost every serious social issue facing German and European society today: race, class, politics, economics, refugees.

When the huge gas station rotates, it is revealed that the back side of the clean and shiny place is in such a shabby state, with filthy garbage cans, cameras that can be turned off at will by bribing the manager, and warehouses that provide a place for refugees to work illegally. The stage keeps spinning and constantly switching between the two sides of the society.

The whole scene spans six years from 2015 to 2021, with 2015 being the beginning of the influx of refugees into Germany, and 2020/21 being the year when all the social problems seem to be covered up under the epidemic, but in reality they are getting worse. One of the most impressive characters in the entire play is a courier who is resentful of society. After losing his job, the gay man slowly joins a right-wing group, and his resentment is amplified under pressure from many sides, eventually shooting the black woman who was adopted by a German family as a child in a gas station.

In Simon Stone’s version, he gives everyone ample opportunity to express themselves. Although the audience applauded the impassioned speech about how someone would never feel part of Germany because of her dark skin, the anger of the “disenfranchised white man” surfaced at the same time, and in a time of cancel culture, giving these people a chance to speak out has became a taboo in theater. Stone argued that the extreme rhetoric of white men who desperately wanted to share their views of the world still deserves a larger share of the play, because as theater maker, the voices from the margins of society should be at the center of the play. Even though it is difficult to define which side is the “voice from the margins,” the absence of people like Stone in the theater who dare to break the taboos is a bigger problem.

One of the very best things about this play is that the complex relationships between the characters are presented to the audience little by little, and the characters’ personalities are slowly built up in the ordinary dialogue. But this also brings the shortcoming of the play, three acts of play each one and a half hours is way too long. And in the last act when everyone starts doing their “summary” feels like a TV show in the last season trying to tie all the knots in the previous seasons.

《In C》 by Sasha Waltz